The graduates’ databank in Morocco 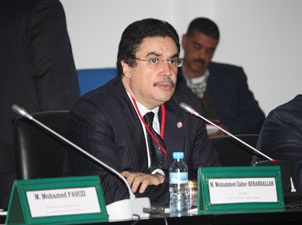 “Universities should play a driving role within society and economy. Since the AlmaLaurea system pursues this objectives, we decided to import it", Mohammed Zaher Benabdallah, president of the University "Mulay Ismail" of Meknes said. AlmaLaurea has started in Morocco the European Project Grinsa, Graduate's Insertion and Assesment as tools for Moroccan Higher Education Governance and Management, aimed at an experimental reproduction of the graduates' databank on the AlmaLaurea model. “The service offered by AlmaLaurea makes the best of our most educated human resources’ talents and eases the search for the CVs of the most skilled personnel by companies”, president Benabdallah said while taking part to the presentation of the 12th AlmaLaurea Report on graduates’ employment conditions, which took place at the University of Calabria.
Italy and Morocco: a partnership for the Grinsa project. What is it aimed at?
“The Grinsa project is an evaluation instrument that cannot be relinquished. It enables us to obtain representative estimates of the effectiveness of the Moroccan academic system and its importance is further increased by the “Instance Nationale d’Evaluation”, a single, centralised organism aimed at the evaluation of the entire educational system: from primary to academic education. Only three pilot universities are taking part to the project: Meknes, Oujda and Marrakech. We wish that all the Moroccan universities may be included in the databank”.
The AlmaLaurea system connects universities and labour market: what kind of added value does it provide to Morocco?
“The project has immediately aroused interest among the professional associations and the national organisations that are concerned with economy and labour market, such as the General Confederation of Moroccan Entrepreneurs (CGEM), the Regional Investment Centre and the employment agency known as ANAPEC (Ageance Nationale de Promotion de l'Emploi et des Competences). All these organisms are very interested in investing in this sector. Having a collection of data available would enable them to find and select in the best possible way the CVs of the graduates who meet their educational and professional requirements".
The 12th AlmaLaurea Report shows an increase in the Italian graduates’ unemployment rate. How is the situation in Morocco?
“The most important advantage of using the AlmaLaurea databank is the following one: in Italy you have very accurate statistics, which enable you to obtain a reliable snapshot of the economic and social situation of the country. We don’t have a similar effective system in Morocco yet. The only statistics we have are those supplied by the High Commission for Planning (HCP). However, even these data alone show an increase in the unemployment rate. As it happens in Italy, also in Morocco there is a gap between the requirements of the labour market and what is offered by the educational system. This gap is damaging the entire system”.
Isn't the academic system meeting the requirements of the labour market?
“For a long time Moroccan universities have been concerned with courses giving students educational qualifications that did not correspond to what the labour market was looking for. Therefore, we are now experiencing a paradoxical situation: many graduates are unemployed, while companies are looking for high-skilled professionals who aren‘t actually available on the labour market.”
Are you carrying out any preventive measures to check this phenomenon?
“The Moroccan government has introduced new degree subjects in 2006, in order to face this educational gap. These subjects are: tourism, automotive and airline industry, financial market, information and communication technology and the engineering sector. For each sector the government has established the number and the kinds of professional figures that will be necessary during the next years. There is a clear message: while facing the requirements of the labour market, it is necessary to direct the educational policies. To reach this goal, funds have been allocated. All the countries of the Mediterranean area are facing the same problem. Only in this way a knowledge- and action-based economy, that all of us has been wishing, can be realized".
Europe is taking a step forward due to the Lisbon Treaty. How is Morocco acting in this context?
“Although we haven't signed the Lisbon Treaty, we decided to align our higher education system to the European model, since our country plays an important role in the union of the Mediterranean area. AlmaLaurea is a very important step".