in collaboration with the Embassy of Italy in Washington,
the Italian Cultural Institute and Italians in Dc

If you are not able to come, follow us on LIVE STREAMING

AlmaLaurea has been presented, in September 2003 in Wall Street during the Italian Day promoted by our Government, as a strength for foreign investors in our country.

Our goal is to introduce the successful model developed in Italy for sustaining companies who plan to invest in Italian human capital, both in Europe and the rest of the world, and students who face an ever-more globalized job market.

The size, quality and timeliness of its services make the AlmaLaurea databank quite unique in Italy and an unequalled model on the international scale.

The event at the Italian Embassy will focus on the presentation of the AlmaLaurea model and on the services provided for Italian companies in the United States and for American companies who are looking to recruit our graduate students. In the last ten years AlmaLaurea has given more than 3.500.000 curricula to Italian and International companies.

Since 1994, as a public Universities consortium (collecting 1.800.000 curricula, 85% of graduates in Italy), with the support of the Ministry of Education, AlmaLaurea has been a model for the analysis of academic performance of graduates’ and, their entry into the labor market, as well as a meeting point for graduates, universities, and the business world.

The AlmaLaurea model will be also presented at the World Bank on June 4th with other purposes. AlmaLaurea is deeply committed to spread awareness in the European and international context; and opened to cooperation for graduates database’s design in foreign countries or to establish stronger links with similar experiences. The European Commission has approved 3-year cooperation projects with different Universities of the Mediterranean area: Morocco, Tunisia, Armenia, Serbia, Bosnia, Croatia and Montenegro. AlmaLaurea is also developing  new projects with South American and South Asian Universities.

16.30 p.m.
Welcome Greetings
Ambassador Claudio Bisogniero
Andrea Cammelli – Director of AlmaLaurea and Professor at Bologna University
16.50 p.m.
AlmaLaurea Model: a meeting point for graduates, universities and companies
Andrea Cammelli – Director of AlmaLaurea and Professor at University of Bologna
17.20 p.m.
Italian graduate talents: a resource for companies and the community
AmaLaurea recruiting and selection services
Francesca Ralli – Marketing Manager at AlmaLaurea
Marco Piana – Recruiting and Selection Specialist at AlmaLaurea
During the presentation we will introduce the case studies of two American Companies that use AlmaLaurea services
17.45 p.m.
Forum with companies and guests and question time 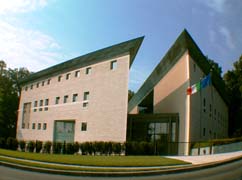